Three Rivers Guide Service has enjoyed a busy, memorable and successful summer.  As my guiding season was getting underway I had intentions of making weekly Blog posts.  Well, that obviously didn’t happen.  Perhaps this fall I’ll find time to follow through on my Blog promise.   Although I am heading out tomorrow morning for another trip on the Penobscot, I wanted to include a few words about one of this summer’s memorable trips.

Late last winter John booked a full day day trip on the Kennebec.   John intended to treat his nephew to a day of bass fishing.  Turns out John’s nephew, Tommy, spent the better part of the winter recovering from multiple hip surgeries.  When I met Tommy back in July he looked like a young man well on the road to recovery.  He certainly didn’t have any trouble hooking and landing lots of smallies throughout the day.  We floated the Sidney to Augusta section of the Kennebec.  It’s full of smallies, albeit with a high percentage of 12-13″ fish, but if you want consistent action it’s a great float and one that often produces surprises.   John and Tommy caught fish throughout the day casting a variety of lures ranging from spinner baits to rubber worms.  As we neared the end of the trip, I asked John if he wanted to give the fly rod a try.  John may be new to the fly rod but had little difficulty making casts within range of the very cooperative smallies.  Within a half hour John persuaded a couple of smallies to eat a dead drifted black popper.  Hooking and the subsequent landing was another matter.   Eventually we put it all together and John brought a couple of fish to hand.  The third fish to take the popper was the fish of the day: a 20″ Kennebec smallie.  Rivers are a much tougher environment for smallmouths than ponds and lakes so we don’t expect to catch too many in this size range.  After releasing the large and old smallie, John put both the fly rod and spinning rods down for the duration of the float and simply enjoyed the rest of the float.  It’s worth noting that Tommy continued to hook and land fish until the trip’s end. 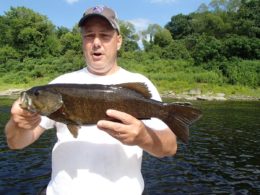 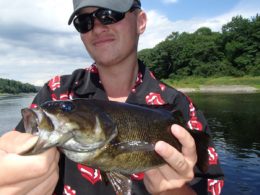 Tommy with yet another one!