This summer I spent the day with long time client, Tom McDowell and his oldest son, Richard.   Tom and I have been fishing together long before I began guiding.  Tom is a serious fly fisher and talented fly tyer. He’s great fun to guide because he knows exactly what he wants: smallmouths on the surface.  Richard also loves the smallmouths but until recently was strictly a spin fisherman.  There’s a good reason to pursue smallies with spinning gear, as spin fishermen often dramatically out-fish even the most talented fly rodder.   During previous trips Richard would occasionally pick up a fly rod and was in fact beginning to catch a few fish on the fly.

Partly due to the difficulty of casting bass flies in the wind and the lure (no pun intended) of the unquestionably effectiveness of spinning gear, the fly rod inevitably would be replaced with the spinning rod.  However, during this most recent trip, within a few moments it was readily apparent Richard’s ability to handle a fly rod had dramatically improved since our last trip.  His confidence and the smallmouth’s willingness to take top water flies throughout the day certainly played a role in Richard’s persistence with the fly rod.  It’s great fun to pursue small mouths with spinning gear but it’s tough to deny the satisfaction of fooling smallies while casting a fly rod.  I am not so naive to expect Richard will abandon the spinning rod anytime soon, yet a day fooling bass with flies has certainly increased the likelihood that next year’s trip will start and end with a fly rod. 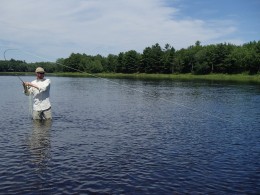 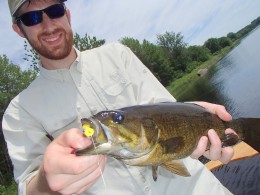