It was only last month we were concerned about the potential for spring flooding.  Now, only three weeks since the river flows topped 50,000 cubic feet per second, flows have dropped below 6,000 cfs and the water is warming up nicely.  A couple of weeks ago as the flows began to drop, I couldn’t resist the urge to get in my drift boat.  On May 3rd I floated the Waterville – Sidney section.  Despite water temperatures in the mid 40s I did manage to find a few willing smallmouths.   Not surprisingly, these fish were found in slack water and near the bottom.

Last week, as air temperatures soared, the river flows continued to drop and by Sunday afternoon water temperatures nudged 60 degrees.  It felt like a summer day as I wandered down to the river with wading sandals, shorts and t-shirt.   In contrast to the previous day’s attempt to fool a few fish, on Sunday I found the smallmouth were looking up and willing to take a floating fly.   In the course of two hours, I fooled seven bass while dead drifting a favorite top water fly: Todd’s Wiggle Minnow.   A passing rain shower did little to slow the action or dampen  my enthusiasm.

We haven’t reached May’s mid point and the 2015 season is underway. 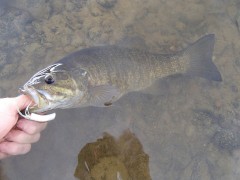 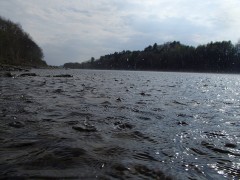 Rain on the Kennebec River 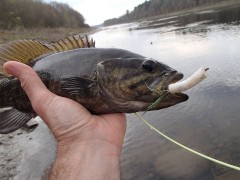