The smallmouths are stirring in the Kennebec River.   Much to my delight, before the end of April river temperatures had reached the low 50s and a few bass were looking up.  On the afternoon of April 25th in the course of an hour I coaxed a half dozen fish to take a Todd Wiggle Minnow dead drifted on the surface.  It was looking like another early season, but persistent cool day-time temperatures coupled with a significant rain event put the season on hold for a couple of weeks.  We are now a week into May and while the river temperatures struggle to reach 60 degrees, the fishing appears to be improving.  Eventually the sun will win this game. Yesterday as daytime temperatures soared to 60 degrees, we enjoyed a few hours wading the tidal section of the river in Augusta.   I wouldn’t describe the action as fast yet the smallies were willing to take both subsurface and surface flies.

The arrival of the anadromous alewife, a.k.a., a river herring, is another sure sign of spring.  After four or five years at sea, mature adults are ascending Seven Mile Stream in Vassalboro on their way to Webber Pond and Three Mile Pond.  Today, before noon, Don Lettre, the fellow in charge of the Webber Pond fishway, had already counted 8,000 adults entering the pond.  A slow start to the alewife run will likely pick up as the forecast calls for warmer temperatures throughout the week.   As many of Maine’s rivers and streams fill with the returning alewives, they will be welcomed by lots of hungry creatures.  I have already seen several great blue herons and osprey in search of the river herring.  The returning adults are a bit too large for all but the largest bass.   However, their offspring represent a timely source of sustenance beginning in late summer – early fall as the juvenile alewives begin their downstream migration to the sea. 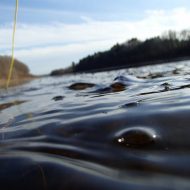 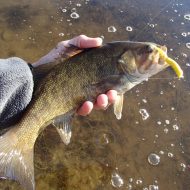 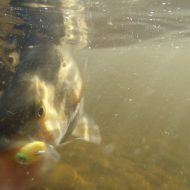 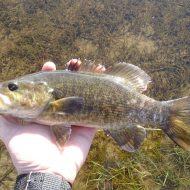 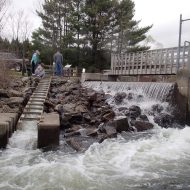 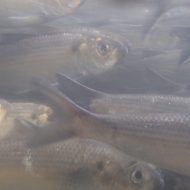 Alewives staging in pool below fishway 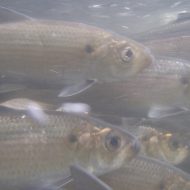 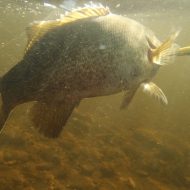