It won’t be long before millions of alewives return to the Kennebec River.   Every spring, adult alewives return to their natal rivers after spending three to four years in the Atlantic Ocean.  The adults range in size from 10″ to 12″ and are on their way back to many of the ponds and lakes within the Kennebec River watershed.   Unlike other river herring (e.g., Bluebacks and American Shad) that spawn in freshwater streams and rivers, alewives prefer still water for their reproduction rituals.   Thousands of the Kennebec’s returning alewives will make a right hand turn and head up Seven Mile Stream on their way to Webber and Three Mile ponds.  The fishway on the outlet of Webber Pond (pictured below) provides easy passage around the pond’s outlet dam.   Fish passage, like the denile ladder on Webber Pond are the exception and not the rule.  Unfortunately today, alewives have unobstructed access to a fraction of the lakes and ponds that were once part of their native range.  Thanks to Maine’s Department of Marine Resources ‘DMR’ anadromous fish restoration efforts, many of the alewives returning to the Kennebec River “participate” in the Department’s trap and truck program.  Each year this program transports hundreds of thousands of adult alewives to ponds and lakes within the Kennebec River watershed.

Alewives, also known as river herring, represent an important and abundant food source for lots of creatures.   If you spend time along the Kennebec River during the alewife run, you are likely to see some of the creatures that dine on the returning alewives.  The list of predators is lengthy and includes great blue heron, osprey, eagles, loons and otters.

The adult alewives that escape this gauntlet will produce thousands of juveniles.   Shortly after spawning, the adults will return to the ocean, perhaps to return to the ponds and lakes another year.   By mid July, huge schools of juvenile alewives are evident in Webber Pond.  Webber Pond’s largemouth bass population certainly benefits from the abundant food supply.  When the juvenile alewives reach three to four inches in length, usually by late summer, their outmigration to the ocean begins.

To date, the Kennebec’s alewife restoration efforts have focused on the Sebasticook River and Seven Mile Stream drainages.   Consequently, much of the Kennebec River’s alewife production potential remains untapped.  This is unfortunate given its tremendous potential.   There are, however, ongoing efforts to take advantage of additional drainages within the Kennebec River watershed.  Last year the DMR began stocking China Lake.    According to DMR biologist, Nate Gray, China Lake could add millions of alewives to the Kennebec River’s annual river herring run.  There is significant untapped alewife production in the lower Kennebec.  The potential for alewife production within the Cobbosseecontee Stream watershed may rival the Sebasticook drainage.  At this time only a single pond (Pleasant Pond) within the Cobbosseecontee’s drainage is stocked annually with alewives.   The alewives only reach Pleasant Pond courtesy of DMR’s trap and truck program.   There are currently no fishways on the Cobbossee’s dams.

Back to Webber Pond.  Within the next couple of weeks I expect the alewives will begin to return to their home water.   Stay tuned, in the coming weeks, I’ll post photos to document their return. 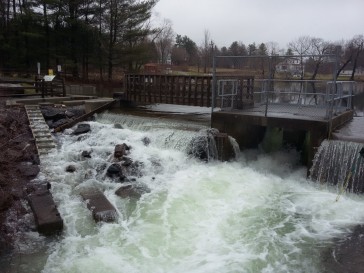 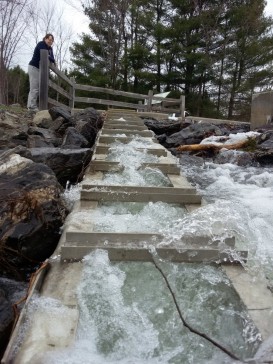