Some of you may be surprised to learn of my trout fishing heritage.  Brace yourselves, I do in fact have a few salmonid roots.  By the early 1990s as fly fishing was becoming a central theme in my life; ultimately it became a life-long passion.  Obsessions masquerading as passions exhibit a wide range of behaviors: some mildly entertaining, others best described as bizarre.  In my case it included stashing jon boats on remote fly fishing only ponds scattered throughout western Maine.  These boats provided a means, not entirely satisfactorily, to effectively fish a trout pond. Here I should note that I did not act alone; rather I joined forces with a like-minded fly fisher, who I will further note also has a fishing problem.  Unfortunately, it wasn’t long after a handful of jon boats populated some of our favorite ponds, we discovered float tubes provided a far superior fishing platform and could easily be transported through the woods for day use on remote ponds.  To our credit (partial as you will soon discover), we removed all but one of the boats within a few years of the conversion to float tubes.  This year marks twenty-six years since I last fished the pond where the last boat remains. 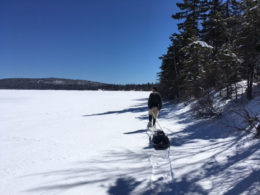 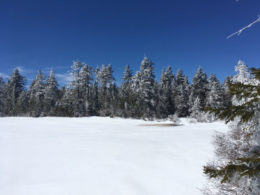 Maine’s remote trout ponds are literally littered with abandoned boats.  You may wonder how does this happen?  Here’s the simple explanation: it turns out all fly fishers that stash boats will ultimately die and not all fly fishers remove their boats before death.  My potential contribution to this widespread trout pond blight came to an end last week.  After 26 years, I returned to the remote western mountain brook trout pond with the tools to exhume my old boat.  I began this adventure with a good friend and it’s doubtful the recovery effort would have happened without the encouragement of a fellow outdoor enthusiast! 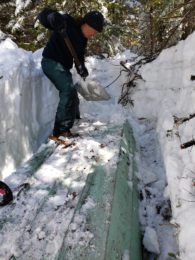 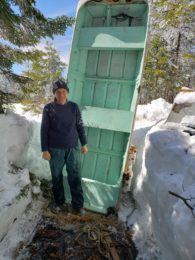 The photos tell a good part of the story.  Signs of spring may abound at lower elevations, yet the snow-covered trail and ice bound ponds tell a different story.  After some reconnaissance we found the boat buried under several feet of snow. To our surprise, in recent years it had been used as a shelf on which to store another boat!   Within a couple of hours, we successfully uncovered the old boat, loaded it with our gear and began the sledge-like haul back to the highway.   Hey, give me a call if you are in the market for a well-used but not forgotten jon boat! 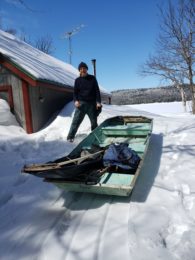 The sledge out of the woods 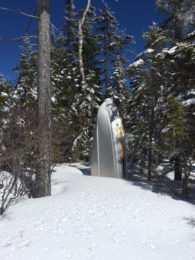