While it’s only June 5th it feels like summer is in full swing.   During the past two weeks flows in both the Kennebec and Penobscot Rivers have dropped significantly.  They are now roughly half the median flows for this time of year.  Along with the unusually low flows, the water temperatures have reached the high 60s and the smallmouths have responded as expected.  My guiding season is off to a great start.   Before May came to an end, Three Rivers Guide Service had completed several trips on the Kennebec and Penobscot.   For the first drift trip on the Penobscot, I recruited a friend to help me scout a “new” section of the river.  It turned into a challenging spring day on the river.  The forecast called for rain showers and light and variable winds but spring weather is predictably unpredictable.   Slow but steady interest from the bass coupled with no wind made for a pleasant start to the scouting drift trip.  Because our subsurface offerings proved no more effective than top water flies, we favored surface flies throughout the day.  As noon approached we were confronted with a spring thunderstorm along with strong gusty winds that rather quickly convinced us to take shelter on one of the numerous islands.   It’s interesting how easily we both disregarded the first rumbling of the approaching storm.   An hour later, with the storm safely past, we continued the scouting trip.  Unfortunately, the air temperatures dropped considerably and the wind remained gusty and bone chilling.   We managed to continue to fool a fish now and then although the conditions remained less than ideal.   A typical spring day on the river.

In contrast, last Saturday’s drift trip on the Kennebec was spectacular as it felt more like early August than late May.  With air temperatures reaching the mid 80’s accompanied by water temperatures in the high 60’s, the smallmouths cooperated all day long.   My clients caught fish throughout the day using the fly fisher’s answer to the Rapala;  Todd’s Wiggle Minnow.   When the fish are looking up, it’s tough to find a better fly than a dead drifted wiggle minnow.

The height of the Kennebec’s alewife run certainly contributes to the density of eagles. Throughout the day we saw at least a dozen individual eagles, both immature and mature birds.  I have wondered if the sheer number of eagles plays a part in the apparent scarcity of osprey.   That’s a question for a birder.   In addition to the millions of alewives returning to the Kennebec, the shortnose and atlantic sturgeon have returned.  There is no question about their presence when a five foot long sturgeon rockets skyward and you are fortunate to see the “event” from start to finish.   On both Saturday and Sunday we also spotted another of the Kennebec’s anadromous fish; the sea lamprey.  This is a truly prehistoric fish that gets little respect in large part due to its parasitic life style.  Using their disc like mouth, an adult sea lamprey will attach itself to an unsuspecting host and literally suck its life out!   Each spring mature sea lampreys enter the Kennebec and many other Maine rivers, with the sole intention of reproduction.  This year I spotted dozens of their spawning nests (i.e. redds), many occupied by sea lampreys intent on their final mission: reproduction.  To my knowledge, its the only anadromous fish native to the eastern seaboard that is programmed to die after spawning.  Based on the large number of unoccupied redds we observed on today’s drift trip, it appears many of the adult sea lampreys have completed their life cycles.  Soon, another of the Kennebec’s anadromous fish will return in significant numbers.  The American shad, unlike the sea lamprey, is welcomed by many including a large number of fisherman, myself included. 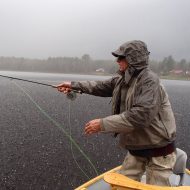 Casting in the spring rain 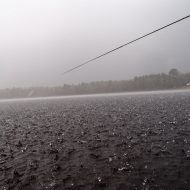 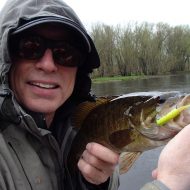 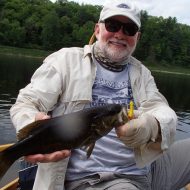 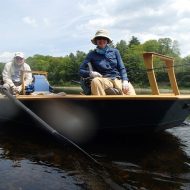 Drift trip on the Kennebec 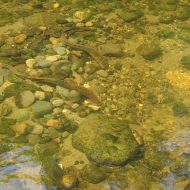 Two Sea Lamprey on a redd 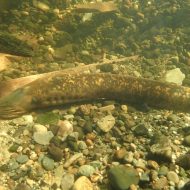 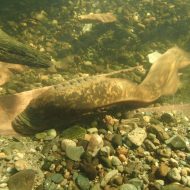